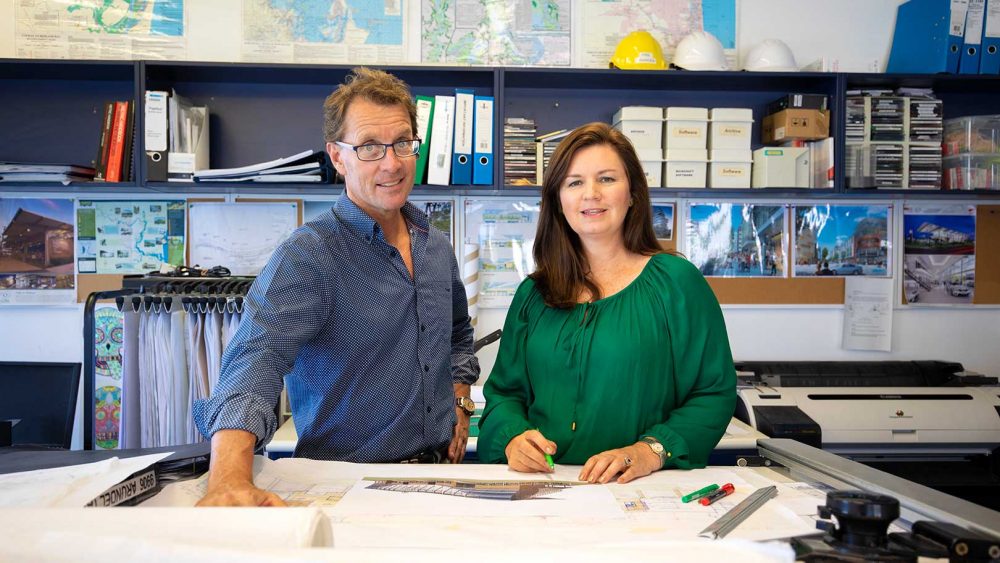 Helping Oprah Winfrey with a humanitarian project to working on Olympic-sized stadiums, two of the Sunshine Coast’s newest residents are now using their wealth of experience to help transform the Sunshine Coast Stadium among other significant developments.

Caroline Dann who boasts international hospitality and private sector experience and David Cox who had high level involvement in government and public works, recently made the move from Toowoomba with Aspect Architects and Project Managers (Aspect APM) as part of a merge with one of the region’s longest standing businesses – Ken Down Architects (KDA).

The team has hit the ground running, taking on the conceptual design of the Sunshine Coast Stadium redevelopment with the long-term goal of turning it into an Olympic-friendly venue as the state government ramps up its efforts to attract the 2032 event.

Project Management & Quantity Surveying Chief Operating Officer David Cox said the Sunshine Coast is one of the fastest growing regions in Queensland and it’s exciting to be part of the growth.

“The stadium project will be a massive and significant development for the region – we’re working with an existing footprint and coming up with something attractive and sustainable,” Mr Cox said.

“This will be an asset for the region and could even be used as a world-class facility if Queensland can win the bid for the 2032 Olympics.”

Mr Cox spent more than 30 years in the Department of Housing and Public Works as an Executive Director before taking on the role at Aspect APM where amongst other significant projects, he has facilitated a multi-million-dollar education building program with the Catholic Diocese in Toowoomba.

He now works with Caroline Dann who has international experience as an architect and interior architect in South Africa, London and the Middle East.

“While I was working in London, there were a significant number of heritage listed buildings, this design work was extremely challenging and one had to really ‘think outside the box’ to have any creative impact,” Ms Dann said.

“My first solo project in London was the redevelopment on the Waldorf Hotel, transforming a traditional theme into something more contemporary and modern.”

Ms Dann later moved to South Africa where she was given an opportunity to work on a humanitarian project with Oprah Winfrey.

“Oprah was gifted some land by Nelson Mandela, she had a vision to build a school for disadvantaged girls, and I was lucky enough to work on the Oprah Winfrey Leadership Academy for Girls. We were the contact on the ground, and did a lot more than just design the buildings,” Ms Dann said.

“I went to Chicago and met her at her studios and presented all the designs – it wasn’t just the architecture and interiors but right down to making sure the school uniforms were what she wanted.

“Because the girls were coming out of very poor environments, they would arrive with nothing. We put together care packs with shampoos, toothbrushes and toothpaste –the emphasis was always on the well-being of the girls. It was incredibly rewarding to be a part of an architectural project that would have such a life changing impact for so many girls!”

With the Maroochydore CBD coming out of the ground and the Sunshine Coast Airport expansion well underway, Ms Dann said it will open up opportunities, so people won’t have to travel to Brisbane for work.

“This isn’t a small regional town anymore, the expansion of the airport will create links with other cities and with that will come hotels, resorts and commercial developments and as a hotel designer that’s really exciting for me,” Ms Dann said.

“We may be a regional area, but people have chosen to live here and there is a lot of untapped skill that we really should utilise.”

Aspect APM and KDA has a strong belief in training the next generation and Mr Cox said having businesses like theirs expand into the region will create additional opportunities for young people to learn.

“I have always considered this a desirable place to live but you have to have the job prospects to go with it,” Mr Cox said.

“For the Sunshine Coast to grow, I think it’s really important to have experienced professionals delivering projects in the region. Aspect APM supports a number of students working through their degrees and master programs.”

Aspect Architects & Project Managers and Ken Down Architects have offices in Mooloolaba, Toowoomba and Brisbane with a team that focusses on commercial, government, residential and public projects.

To find out more, visit their website at www.aspectapm.net