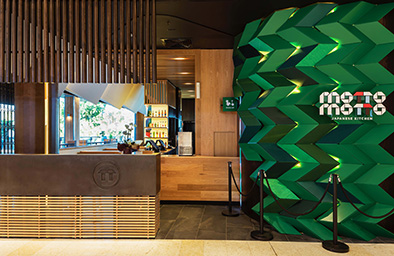 Eating out is no longer seen as a luxury with more people choosing to bypass the supermarkets each week but the new Sunshine Plaza casual dining restaurant Motto Motto is turning fast-food on its head, ensuring quality isn’t jeopardised.

Highly regarded restaurateur William Liu – who is the mastermind behind the fine dining restaurant Sono– rolled out the healthy fast-food restaurant concept in Brisbane in 2014 and has now brought it to the Sunshine Coast for the first time this year.

When the Sunshine Plaza opened its $400 million redevelopment to the public almost six months ago, it followed the global trend to offer a greater variety of food options and experiences in a traditional shopping centre environment.

Motto Motto owner Mr Liu said there is a real shift from people wanting the typical food court experience when they go shopping.

“The restaurant allows people to step away from the busy centre, relax and enjoy healthy yet delicious food,” said Mr Liu.

“There is a demand for quality and affordable food options and our chef has a passion for using fresh gourmet ingredients inspired by our fine dining restaurants in Brisbane.

“The restaurant might be in a shopping centre but when you walk through the door, you’re met with a fusion of modern Japanese décor and traditional Japanese food.

“The whole concept of Motto Motto is for people to try something new and authentic – Japanese cuisine is more than just sushi.”

The Australian Bureau of Statistics report shows the need for eating out options is certainly there, with the share of meals out and fast food expenditure increasing from 25 per cent in 1988-89 to 34 per cent in 2015-16.

That same 2015-16 household expenditure report explained households spent between $86-$113 on meals out or fast food depending on their income each week.

The Sunshine Plaza executive chef Ryuji Tomihara said when Mr Liu established a fine dining experience in Brisbane, the idea of Motto Motto was to incorporate that similar top quality food at a lower price in a quick convenient location.

“Accessing local produce is one of the most important things to a chef – using ingredients that you know will create an appetising dish,” said Mr Tomihara.

“It’s crucial to let the fresh ingredients shine through in the meal, rather than over complicating it.

“The grade of the meat at Motto Motto is extremely high and we challenge people to find a better quality wagyu or sashimi.

“We avoid processed foods that are often found in food courts and ensure all our meals are cooked upon ordering so you know it really is as fresh as it can be.”

Motto Motto opened at Maroochydore’s Sunshine Plaza in March along the new river walk, establishing itself as a top quality dining out and take away restaurant. It is open from 10am to 6pm Monday to Sunday, with extended hours on Thursday.