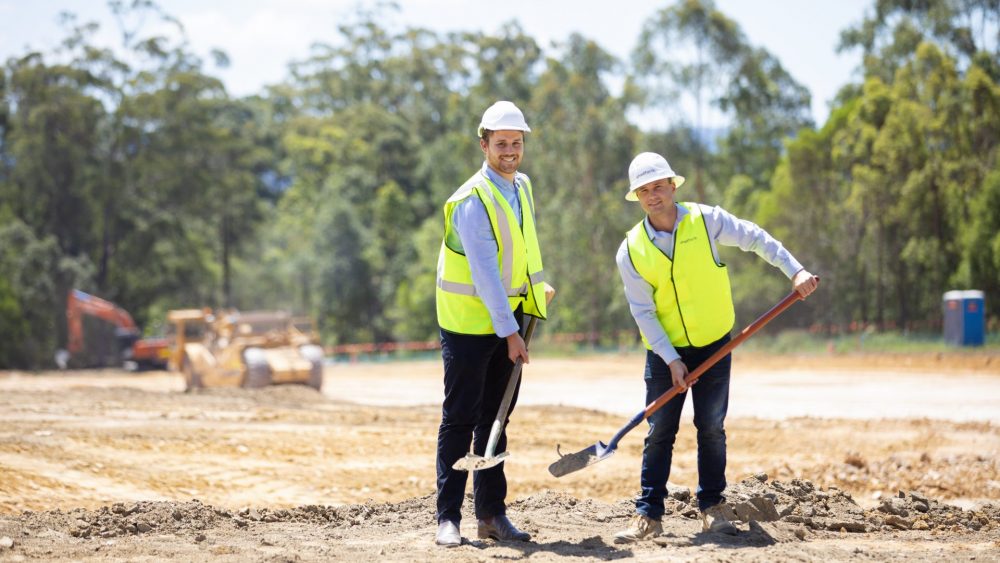 Figures from Hotspotting’s most recent report show the Moreton Bay region has the highest number of growth suburbs[1] across the Greater Brisbane Area[2] — a statistic reflected in sales at Woodford’s newest residential estate Hamilton Place, having more than 85 per cent of lots sold as the first sod was turned recently.

“We identified the opportunity to launch Woodford’s first residential estate in over a decade at a time when demand for residential land was higher than we’ve seen it in years,” Mr Reed said.

“The two-stage development was launched in July and lots in Stage One were snapped up within the first eight weeks. We then launched Stage Two a little over a month ago and we’re almost sold out, which is very encouraging.

Shadforth Construction will complete the development’s civil works, which are expected to be finished by mid-February next year.

“The construction will create almost 90 jobs, with a full time project team consisting of 10 people and more than 75 people expected to be working on the site,” Project Engineer, Kayl Ferguson said.

“The work will comprise of earthworks, drainage, roadworks and installation of services for the development of allotments.

“If the weather is on our side, we should see buyers beginning construction on their homes by March.”

Mr Ferguson said the company has seen more opportunities over the past 12 months, with around 40 residential subdivisions between Coffs Harbour and Mackay currently under construction.

“We have seen an increase over the past 12 months, however we continue to focus on working with clients who we have in the past, and our growth has come mostly from repeat work with those companies,” Mr Ferguson said.

Insite Realty Sales Consultant Peter Kinchin said the majority of Hamilton Place buyers were owner-occupier rather than investors, and were motivated by lifestyle and in some cases, a change in pace from city life.

This is line with figures released from the Australian Bureau of Statistics which show a net 43,000 Australians moved to regional areas from capital cities in 2020, which was the largest net inflow to the regions on record[3].

“Affordability has been an important factor in the buyer’s decision-making process with traditional-size allotments in Woodford being very attractive when compared to smaller, more expensive alternatives in the Caboolture, West Caboolture and North Lakes areas,” Mr Kinchin said.

“Those looking to buy in the current market are facing limited availability of land which automatically puts pressure on the price point, so 600sqm lots starting from around $259,000 just a short stroll from a historic country town and backing onto a P-10 school tick a lot of boxes for buyers.”

For more information about Hamilton Place or to register your interest, visit www.hamiltonplace.com.au or call Insite Realty Sale Consultant Peter Kinchin on 0472 659 009.