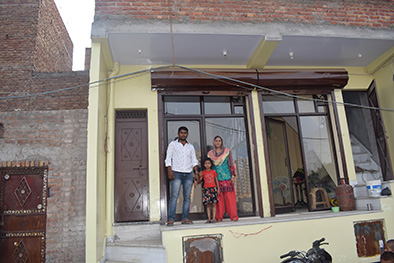 Construction of the Ivy at Picnic Point in Maroochydore is making a world of difference for families thousands of kilometres away in India who have officially moved into their newly built homes.

The Kratzmann Group’s latest development is already making a huge impact on families in the Bawana slum of New Delhi, partnering with global charities B1G1 and Habitat for Humanity to build a home for every apartment sold at the Maroochydore waterfront site.

The limited eight-storey luxury apartments are nearing completion with 29 of 37 sold, almost securing the goal to construct 37 homes in India.

The Kratzmann Group manager Mark Kratzmann said he’s hoping to sell the remaining eight prior to completion so they can build more homes for people living in unhygienic and unhealthy conditions.

“Not only can someone purchase a luxury home of their own in a prime location, overlooking the breathtaking Maroochy River, but they can move in knowing they’re changing the lives of people in desperate need of safe shelter,” said Mr Kratzmann.

“It brings a great sense of satisfaction and gratitude when you can transform someone’s life in such an enormous way.

“Zamila and her husband Ali Aula were living in a make-shift house with a plastic sheet, bamboo poles and temporary brick walls.

“While Shehnaz and her husband Md Naushad worked extremely hard to buy a plot but couldn’t afford to build, which meant they lived in rented accommodation for around three years.”

The two families are the first to move into their homes with construction starting on a further four homes in March 2020, with the rest to be rolled out in the following 12-18 months.

“The standard of living in those parts of India are poor and confronting,” said Mr Kratzmann.

“When you see it first hand, with two-year-old’s jumping over open sewers to enter their current dwelling, it’s impossible to turn a blind eye and come back to the privileged life we take for granted in this country.

“That’s why this project is at the core of what makes the Ivy at Picnic Point special – our owners are very fortunate to live in a beautiful location in Queensland, so instead of taking it for granted, we’re making sure that we do the best we can do to provide safe shelter and running water for those in need.”

Tony and Sue Wilshire who were first to purchase one of the Maroochydore apartments said The Ivy designers had thought of their every need at this stage of life, including a lap pool, steam room, and premium facilities, and the cherry on top was knowing the developer also has a robust social conscience and company mission.

“We didn’t know anything about Habitat for Humanity when we first decided to purchase one of the apartments but since then we have become an advocate for this developer and their core company values,” said Mr Wilshire.

“The Kratzmann Group truly care about looking out for the most vulnerable here and abroad, and we’re more than happy that with our retirement purchase, we are ensuring another family also gains a true home as well.

Tony Wilshire, who also is also the Vice Chairman of the Apex Foundation, is a huge supporter of people from underprivileged backgrounds, particularly children.

“Mark’s actions, generosity and social conscience had a huge influence on us to support the Ivy project,” said Mr Wilshire.

“It was exciting to hear the first two residents, who have moved in to their homes in New Delhi, are happy, healthy and safe.”

The remaining apartments at the Ivy are priced from $515,000 with most of the building consisting of owner-occupiers with no on-site management.

The first residents are expected to move in by January 2020. For more information, visit the website: www.theivypicnicpoint.com.au