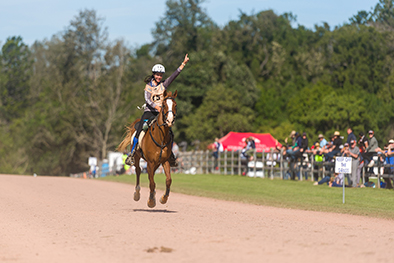 Local endurance rider Kaylea Maher got to fulfil her dream of holding up the most coveted prize in the sport of endurance riding ― the Tom Quilty Gold Cup ― when she crossed the line on Saturday ahead of 298 other riders from across Australia and abroad in the iconic 160km endurance race.

Ms Maher completed the 160km ride, which was hosted at the Stirling’s Crossing Equestrian Complex in Imbil Queensland, in ten hours and eight minutes after setting off on the ultimate endurance challenge at midnight on Friday night.

The mother of two said while she was hopeful of taking out the win, there were so many factors that influenced the end result.

“Every ride you just take as it comes, as you never know what the end result is going to be,” said Ms Maher.

“You always have to have hope in your horse and believe in your horse, and that’s what we did. We believed in each other and we worked through all our challenges and he came home really strong. I’m really happy with his achievement.”

“Credit goes to the people at home in our stable, they do a fantastic job of looking after him and yes, it’s a lot of hours and a lot of time; a lot of tears and sweat that go into getting a horse to the condition they need to be in to perform on the day. And that’s what we’ve seen, the hard work’s definitely paid off and I want to thank everyone who’s helped me get here.

“It doesn’t matter if you’re at home or away, the competition is still there but to actually pull it off on home ground with the support from all my family, my friends and my team, I guess that’s where it feels good to have this win on home ground.”

“The first time I saw this horse I had a connection with him and I always believed from the first time I rode him, that he could take home the Gold Cup,” said Ms Maher.

“I worked with him from day one on our farm and I had the goal set in my mind that I was going to work towards getting him ready for this 2019 Tom Quilty Gold Cup.”

“Kaylea has had an impressive endurance record having completed 122 official rides covering over 11,600km to this point, as well as taking home the lightweight title at the Tom Quilty Gold Cup three times in the seven years she has competed,” Ms Moir said.

“She’s been riding since she was a young girl and now dedicates her time to training endurance horses, something she does incredibly well as seen in her performance in the Tom Quilty.”

“The ride was very successful with exceptional conditions given the cool, dry weather and condition of the tracks in the Imbil State Forest. There were riders aged from 12 to 77 and they all had from midnight on Friday until midnight last night to complete the ride.”

“There is great prestige associated with completing the ride, hence the tagline: To complete is to win; and every rider out there was aiming to complete the 160km track within the 24-hour deadline to collect their Quilty buckle. The ride is really challenging and the welfare of the horse is paramount so if the rider or one of the 20 vets onsite feel it’s best for the horse to withdraw, that’s what happens. This year 194 buckles were presented to riders who completed the ride with the longest rider out on the course for 20 hours and 53 minutes.”

“We also have the original Tom Quilty Gold Cup here from the Australian Stockman’s Hall of Fame which for many riders is a wonderful connection to when this ride began 54 years ago.

“The idea was based on the premise of completing 100 miles (or 160km) in one day and when R.M. Williams approached his good friend Tom Quilty about the concept in 1966, Tom donated the $1,000 which paid for the original gold cup which is here at the complex at the moment.”

Second place went to Jamie Green from Brisbane and third place to Paul Bidei from France who both rode in the middleweight division.

There was much excitement for the Cole family from Panuara, NSW when mum Jolene took out the heavyweight division while her 13-year-old daughter Emma was the first junior.

“Endurance is a family sport and the passion for horses and the sport is often passed down through the generations,” Ms Moir said.

“We’re thrilled for Jolene and Emma on this great result and with the age limit for the Tom Quilty Gold Cup being 12 years of age, having a 13-year-old take out the title is quite an achievement.”

In the lightweight division Emma Dimech from Table Top, NSW was the top of the leader board while joint second went to Nikki Scott from Imbil and Floor Braunius from the Netherlands who rode a horse from Marburg, Queensland.

Ms Braunius had the ride of her life to achieve what doctors said would be impossible when she shattered her knee in a riding accident two years ago.

“I almost lost my leg three times during surgery and the doctors told me I could never ride a horse again,” said Ms Braunius.

“I made a promise to myself that not only would I ride again, but my goal was to ride in this year’s Tom Quilty. I rode Treasure TE from Toft Endurance stud who made it possible for me to achieve my dream.”

This is the first time that the Tom Quilty Gold Cup has been hosted at the Stirling’s Crossing Equestrian Complex and the iconic ride attracted around 2,000 riders, support crew and spectators to the town.