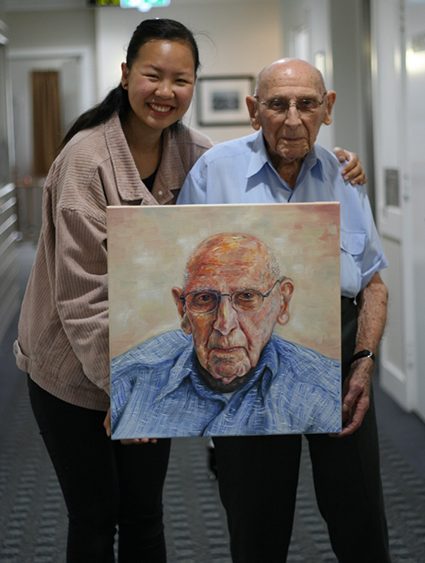 It is no mean feat to celebrate a century of life and to have it set in art makes it even more exceptional. The secret to reaching a 100 years old milestone will be shared by 100 Sydney-based centenarians as part of the exhibition ‘100: A celebration of Sydney´s oldest residents’, part of ‘The Centenarian Portrait Project by Teenagers’ officially launching on International Day of the Older Person, Monday 1 October.

Not too much alcohol, reading regularly, laughing with friends and eating well were just some of the tips that 100 of Sydney’s oldest residents imparted when they had their portrait painted or drawn by a local teenage artist aged between 14 -19 years of age.

The exhibition is the brainchild of Rose Connors Dance, Creative Director of socially driven arts organisation, Embraced and sponsored by key partners Estia Health, the Department of Family and Community Services, Government of New South Wales and The Australian Human Rights Commission.

“The Centenarian Portrait Project is an intergenerational arts initiative that brings together members of the community who might otherwise never cross paths, breaking down loneliness and the negative ageing stigma,” said Ms Connor Dance.

“With community arts projects you can see a positive social impact immediately.”

“I’ve seen how the friendships that develop between artist and subject, teenager and centenarian, can give both sides an enormous sense of understanding, purpose and self-esteem.”

Estia Health, one of Australia’s largest residential aged care providers, is the major sponsor of the project and has seven of its residents aged 100-plus participating.

Norah Barlow, CEO of Estia Health spoke of the importance of supporting the project and how delighted they are to have their residents involved.

“Too often in society, we live our lives independently, forgetting the opportunities that can be gained from generations interacting with each other to share their stories, joy and laughter,” said Ms Barlow.

“We know how positive the benefits can be for residents in our homes, which is why we’re proud to be the major sponsor of such a great initiative. I would encourage people to visit the exhibition to view the wonderful work of the students and see what 100+ years of life really looks like.”

“I left school at a young age and got a job in a book shop which was one of the highlights of my early life. I’ve never stopped reading and learning and I encourage everyone to read more books,” said Mr Jeffery.

Mr Jeffery’s portrait was painted by Cici Hong, aged 19, who was impressed with Mr Jeffery’s good memory and ability to use modern technologies. Ms Hong is in her first year at the National Art School and like all the students applied to be involved in the project by submitting samples of their artworks.

“In his room there is a space especially for photo printing and during our third meeting, we used his camera to take some photos together and printed them out with his photo-printer,” said Ms Hong.

“When Arthur described his life with his photo album in his hands, I was constantly transported to another space and time by his stories.”

International Day of the Older Person has been recognised by the United Nations for the past 28 years as a way in which to raise the visibility of older people as participating members of society and engage broad audiences across the world in human rights for all stages of life.

The opening of ‘100: A celebration of Sydney´s oldest residents’, part of ‘The Centenarian Portrait Project by Teenagers’ will be held on Monday, 1 October with a private viewing from 2.30pm and then open and free to the public from 29 September until 12 October from 11am to 5pm daily at The Studio, 2/85 Dunning Avenue, Rosebery.