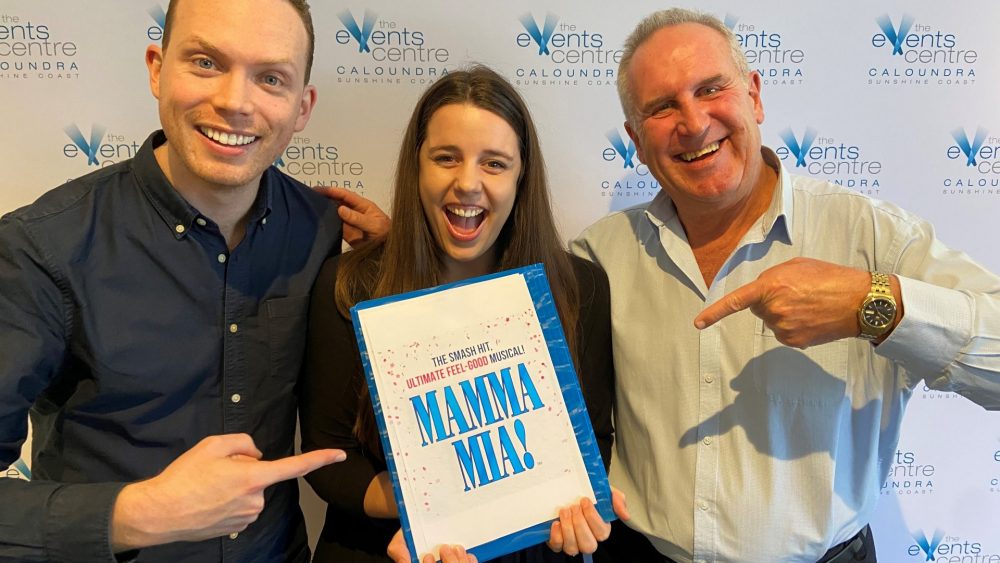 ABBA fans will be primed to hit all the right notes when the curtains are raised on MAMMA MIA! The Musical at The Events Centre, Caloundra in October this year, showcasing not only the best of the Swedish pop band’s songs but also a cast expected to be drawn largely from local talent.

Tickets for the fun, vibrant show presented by The Show Co., are already selling fast and audition registrations are now open to select the cast that will bring the feel-good musical — that has been enjoyed by more than 65 million people worldwide — to the Sunshine Coast.

The Show Co. Producer Katharine Head said while the theatre industry had to survive a challenging 2020 due to the pandemic, the skill and determination of creatives had certainly not diminished and the appetite for live entertainment had soared post-COVID.

“After a year of limited access to live entertainment, audiences are ready for a night out at the theatre now more than ever, and MAMMA MIA! The Musical is the ultimate feel-good musical — exactly what the world needs,” Ms Head said.

“And, being set in a beachside paradise, we can’t think of anywhere better suited to this show than the Sunshine Coast!”

The talented team behind the rendition of MAMMA MIA! The Musical has worked on productions all around the world.

Ms Head has worked on a diverse range of productions including Wicked, Phantom of the Opera, Jesus Christ Superstar, Menopause The Musical and many more, while Director and Choreographer Tanya Mitford’s contribution to musical theatre, plays, film and TV can be seen in everything from The Sound of Music to The Boy from Oz, the Sydney Olympics Opening Ceremony, The Kylie Show, Dancing with the Stars and children’s entertainment including The Wiggles, Disney and Warner Bros.

Fellow producer and Director of The Show Co. Sam Klingner is known for his work on Grease, Hairspray, Chitty Chitty Bang Bang and The Tap Pack as well as being the co-creator and co-owner of the international hit show The Naked Magicians, which has played in more than 250 cities around the world, including a smash hit run on London’s West End and a residency at MGM Grand in Las Vegas.

Mr Klingner said The Show Co. began in 2015 to provide local performers — including both emerging and established performers — the opportunity to work and develop their skills alongside nationally and internationally recognised entertainment industry professionals, while also providing high quality and affordable musical theatre production to the Sunshine Coast community and beyond.

“The Sunshine Coast has a huge pool of talent, and we are so excited to have the opportunity to work with and contribute to this great theatre community,” Mr Klingner said.

“We have also worked closely with The Events Centre on previous productions. It is a stunning venue with a fantastic team and we are so excited to be working with them again on MAMMA MIA!”

The Events Centre, Caloundra General Manager Steve Romer said there was definitely an appetite for live entertainment since the venue re-opened its doors for its first live performance on 29 August 2020.

“We had to close The Events Centre for four months from March to June 2020 and then operated at 30 to 40 per cent capacity for the first few months, before returning to full capacity in November 2020,” Mr Romer said.

“There has been strong demand for theatre shows from all sectors including live contemporary music, stand-up comedy, fine arts, musicals and children’s shows; and brand-name musicals that are well known like MAMMA MIA! are always popular.

“This is also a great opportunity for local talent to have the opportunity to work with professional producers who are locally based and work on national tours.”

The show will be music to the ears of ABBA fans, promising some of their greatest hits in a fresh, fun and vibrant production.

“I think what makes the show so special is that so many people grew up listening to the hits of ABBA and this show is their chance to relive their favourite moments of this music live on stage. It’s also impossible to leave the theatre without a smile on your face,” Mr Klingner said.

Director and Choreographer Tanya Mitford encouraged Sunshine Coast talent to register for auditions being held at The Events Centre in May.

“While our cast will need to sing, act and move, we are ultimately looking for performers with lots of positive energy and enthusiasm, and who don’t mind having the time of their life dancing and singing along to their favourite ABBA tunes!” Ms Mitford said.

Auditions will be held on 22 and 23 May at The Events Centre, Caloundra with registrations available through www.mammamia-themusical.com and closing on 18 May. The cast announcement is expected in mid-July.

2pm & 6.30pm, Sunday 17 October AUDITION REGISTRATIONS Casting brief can be found here or downloaded from www.mammamia-themusical.com. Applications close on 18 May 2021 and auditions will take place on 22 and 23 May at The Events Centre, Caloundra TICKETS Adult tickets $69.90

ABOUT THE SHOW CO. TEAM

SAM KLINGNER (Producer)
While growing up, Sam found his passion for live theatre studying and performing with a number of organisations in his home city of Brisbane, Australia. Now, on the business side of show business he has worked on a variety of productions throughout the world, including: Grease, Hairspray, Chitty Chitty Bang Bang, Cats, The Clairvoyants, The Tap Pack and The Big Bubble Show.

In 2016 and 2017, Sam was Associate Producer for The Works Entertainment, now part of the Cirque Du Soleil Entertainment Group. Productions presented during Sam’s tenure at the company included The Illusionists 1903 on Broadway, and Circus 1903 in Las Vegas. Sam is co-creator and co-owner of the international hit show The Naked Magicians, which since premiering in 2014 has played in over 250 cities throughout USA, Canada, UK, Asia, Australia and New Zealand; including a smash hit run on London’s West End and a residency at MGM Grand in Las Vegas.

SK Entertainment, Sam’s company, is the Australian and New Zealand producer of Menopause The Musical. 2019 saw the show tour to 40 regional venues across Australia, achieving sold out status most nights. 2021 will see the show tour New Zealand, and a return regional Australia tour due to popular demand.
A passionate supporter of the development of live theatre in regional Australia, Sam proudly sits on the Board of Directors of The Events Centre, Caloundra the Sunshine Coast’s premiere performing arts centre.

KATHARINE HEAD (Producer)
Katharine has been involved in countless productions both on stage and behind the scenes including Wicked, Phantom of the Opera, Hairspray – The Big Fat Arena Spectacular, Jesus Christ Superstar, Grease, Cats, Legally Blonde and Singin’ In The Rain. In 2014, Katharine graduated with Distinction from Queensland University of Technology’s Bachelor of Entertainment Industries and has since worked with Museum of Brisbane, Caloundra Music Festival, Harvest Rain Theatre Company, Brisbane Festival, Easterfest, Brisbane Lions Football Club, 96five Radio, Virtual Events and Mater Foundation. In 2019, Katharine commenced fulltime with SK Entertainment and has worked as Producer on Oh What A Night! The Show, Menopause the Musical – Australian Regional Tour, Menopause The Musical – New Zealand Regional Tour, The Tap Pack and Friends! The Musical Parody. In 2015, she was Associate Producer on The Show Co.’s production of Grease and is thrilled to be returning in 2021 as Producer for MAMMA MIA!

TANYA MITFORD (Director & Choreographer)
Tanya’s renowned versatility has generated an extensive career as a Director, Choreographer, Resident Director/Choreographer, Assistant Director/Choreographer, Movement Director, Dance Captain, Performer, and Musician.  Her contribution to musical theatre, plays, film and TV can be seen in: The Sound of Music, The Boy from Oz, Billy Elliot, Alice’s Adventures in Wonderland, McDonald’s We’ll Be Here campaign, Guys and Dolls, Promises, Promises, Dusty – The Original Pop Diva, Sam Mendes’ Cabaret, An Officer and a Gentleman, Little Voice, Grease, Rupert, Masquerade, Dreamlover, Face in the Crowd – Little River Band, Violet, Anna Karenina, Clinchfield, Ruben Guthrie, The Damned, Fiddler on the Roof, Leader of the Pack, Anything Goes, Sugar, Carousel, High Society, Mack and Mabel, The Boyfriend, Gypsy, Jolson, Company, Baby, Sydney Olympics Opening Ceremony, The Kylie Show, Nana, Dancing with the Stars, and The Librarians, as well as children’s entertainment for The Wiggles, Disney, Warner Bros, and ABC for Kids, This, along with victories, performances and nominations for Helpmann and Green Room Awards. Tanya directed and choreographed Into the Woods, Hair, Spring Awakening, Little Women, Seventeen, Footloose, Trigger, Ambition, The Wiz, and Singin’ in the Rain to critical acclaim. She has loved collaborating with many of Australia’s leading entertainers, music theatre companies and state theatre companies including: The Australian Ballet Company, Melbourne Theatre Company, Black Swan State Theatre Company, Perth Theatre Company, Griffin Theatre Company, and State Theatre Company of South Australia. She is also passionate about fostering the next generation of our industry as a Dancing, Acting, Singing and Performance Lecturer with the Victorian College of the Arts, Secondary School and Music Theatre Degree, NIDA, Federation University, the Australian Institute of Music and the Western Australian Academy of Performing Arts as a Director and Choreographer.

JAMES DOBINSON (Music Director)
James is a New York-based Australian music director, conductor, orchestrator and record producer. With a particular eye to the development of new musicals, his work has been seen on stages in New York, around the United states, in London and across Australia.

As music supervisor or conductor, his work includes the original New York and London companies of The View UpStairs, Tim Finn’s Twelfth Night for Queensland Theatre, and the original New York company of Clinton, which led to a long-standing collaboration with composer Paul Hodge in both the US and Australia. He has also led productions for Joe’s Pub at the Public Theatre New York, the Lyric Theatre of Oklahoma, The Crown Uptown in Wichita, Kansas, as well as developmental productions for the Goodspeed Opera House, Berklee Repertory Theatre, Opera Queensland, QT and QPAC, among many others. He is currently developing Paul Hodge’s new opera Riot for Opera Queensland and La Boite.

As arranger and orchestrator, his work includes The View UpStairs (for which he also co-produced the original cast recording), Clinton, the 2015 US national tour of Guys and Dolls, Twelfth Night and Joh For PM!, as well as several years of contributing orchestrations to Queensland’s Carols In The City concerts. In recent years, he has been arranging and orchestrating for Midtown Man and original cast member of Jersey Boys, Michael Longoria, including on the single Like They Do In The Movies, and his forthcoming Motown-influenced album to be released in 2021.

ELLEN TUFFLEY (Associate Director & Choreographer)
Ellen loves the collaboration and cathartic process of creating theatre so, after fulltime training in Musical Theatre [Brisbane Academy of Musical Theatre] and Dance [Davidia Lind Dance Centre], she is now enjoying an eclectic career within the Performing Arts. Ellen has worked with companies such as Grin and Tonic, Queensland Theatre, Harvest Rain Theatre Company and Lynch & Paterson in both performing and directing positions in productions such as Death of a Salesman, The Wizard of Oz – National Arena Tour, Grease – The National Arena Tour, Adelaide Fringe Festival, Hairspray: The Big Fat Arena Tour, Little Women, Legally Blonde and most recently with Jason Klarwein/Grin and Tonic Theatre Troupe as an touring actor. As well as performing in both concert and commercial arenas as a vocalist and actor, Ellen is a Teaching Artist for vocals, dance and acting with various companies across the state. Ellen is thrilled to work with The Show Co’s incredible cast and crew on Mamma Mia and knows first-hand the joy that this story and music will bring to it’s community. Ellen is under the management of Kubler Auckland Management.