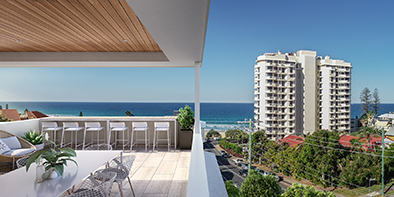 Boutique development Latitude Coolum Beach is making its mark in Coolum with three of the seven apartments ― including the exclusive, premium penthouse ― selling within a month of the development being launched.

HMR Projects Director Ken Reed said he was confident those buyers who have already made the decision to live at Latitude Coolum Beach would not be disappointed.

“We knew this would be a popular development, with high-end apartments in boutique developments close to the beach being a sought after entity across the Sunshine Coast these days,” Mr Reed said.

“Two of the apartments sold within days of being released to the market and the penthouse sold within a few weeks. The interest has been overwhelming, largely due to Coolum having very limited apartments of this calibre available over the past decade.

“The apartments have appealed to both local and relocating owner occupiers, as well as Brisbane residents looking for a coastal weekender they can escape to.”

North Shore Realty’s Principal Noel Mooney said the response to the development had been very positive ― both from a sales perspective and from locals who have been interested in what was planned for the premium site.

“Coolum locals have seen what’s coming with Latitude Coolum Beach and are delighted to see the stylish, boutique apartments planned for a site that has stood empty for quite some time,” Mr Mooney said.

“Coolum has experienced one of its best Christmas/New Year periods, with an influx of holiday makers to the area and many of them have been excited about the development.”

“We’ve also found that people who holiday in Coolum each year have been attracted to the property as they look to secure a home for the future.”

“Most of those looking to purchase are owner occupiers and they see the wonderful lifestyle and value on offer at Latitude Coolum Beach.”

Latitude Coolum Beach consists of three-bedroom, two-bathroom apartments all with secure garaging on the ground floor. The top floor is home to the impressive penthouse offering 247m² of luxurious living and fantastic sweeping ocean views, whilst levels 2 to 4 have two apartments each ranging from 169m² to 231m².

The apartments are priced from $869,000 and construction is due to commence in March 2019.