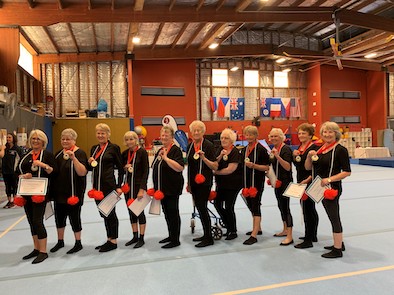 Laureen Tkacik from YMCA Caloundra might be 69 years old but she’s far from slowing down, competing in the Gymnastics Queensland Masters event in Gladstone last weekend.

Ms Tkacik ― who placed first in her age division ― has been learning gymnastics since she was five years old, but stopped competing after doing university and decided to give coaching a go.

“I joined this competition almost five years ago when Gladstone’s Anna Tuestschek first suggested it but you can’t just jump back into training at 65 years old,” said Ms Tkacik.

“You have to ease into it but it is fantastic physical exercise and very healthy. It’s not unusual to have Masters Competitions in Europe, and now it’s really starting to become more popular here.”

Two of the youngest athletes, 21-year-old Brooke Bevis from Sunshine Coast Gymnastics Academy and 20-year-old Rhianna Pendergast from Urban Gymnastics Club, both managed to secure a podium finish for the masters division in their age group, with Ms Bevis taking out top spot.

82-year-old great-grandmother Margaret Wilson joined athletes from the Gladstone Gymnastics Club to compete in a group routine which consisted of 11 athletes starting from 61 years of age.

Gymnastics Queensland Chief Executive Officer Kym Dowdell said the event is continuing to gain momentum and is hoping this will encourage people to join up to their local clubs and compete later in life.

“The event is attracting past gymnasts and coaches as well as people who have never tried gymnastics before,” said Ms Dowdell.

“We want to continue hosting events like this so athletes can put their best foot forward and really get an understanding of how well they’re doing.

“A lot of clubs are offering classes to mature-aged athletes and the more people get involved, the bigger events like this can become.”

For further details regarding this event, please visit www.gymqld.org.au.