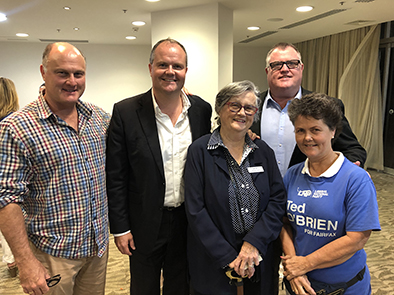 The Sunshine Coast Business Council hosted a Meet the Candidates panel on Tuesday 23 March to provide members with an opportunity to learn more about each candidate’s vision for the Sunshine Coast and their priorities should they represent their constituents in Canberra.

The event ― hosted at Surfair Beach Hotel in Marcoola ― was attended by over 50 members of the organisation and Sunshine Coast Business Council Chair, Sandy Zubrinich, said she hoped the robust discussions went some way to provide clarity for members.

“It is the practice of Sunshine Coast Business Council to conduct Meet the Candidates events for each tier of government in the lead up to local, state or federal elections to give our members the opportunity to hear directly from the candidates and to represent the regional needs of business,” Ms Zubrinich said.

“Candidates representing the major parties from the divisions of Wide Bay (Noosa Shire), Fairfax and Fisher were invited to provide opening remarks before participating in a panel discussion and Q&A session.

“This event aimed to cut through the high volume of information voters need to wade through to differentiate the parties from one another and make an informed decision when attending the voting booths on 18 May.

“I would like to thank the candidates who attended and wish them all the best for the coming weeks of campaigning.”