Best in business set to raise funds for SunnyKids 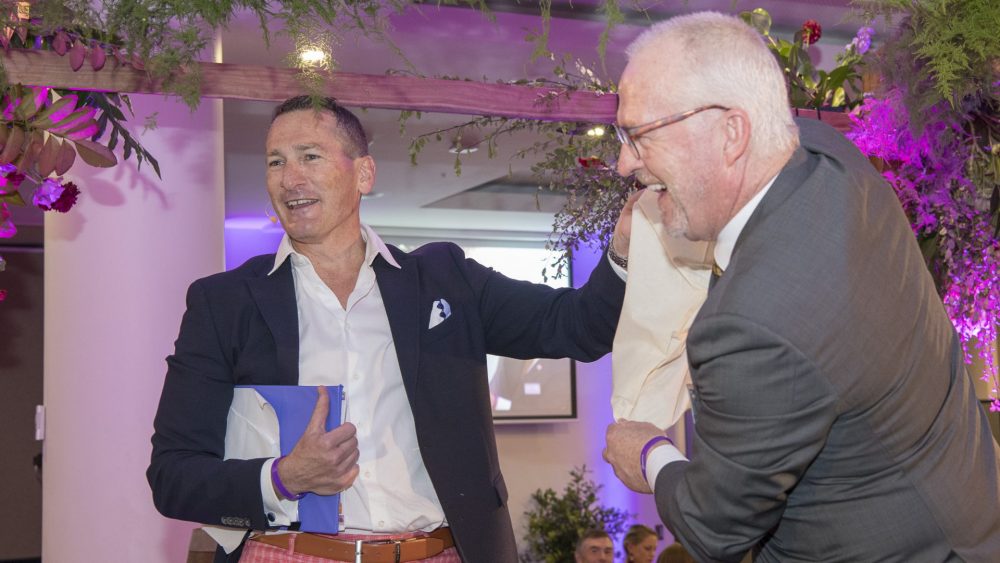 Almost 350 generous Sunny Coast business people will converge on the Maroochy RSL Events Centre on Friday 28 May, 2021 at a sold-out special lunch event to raise funds for a charity that supports our community’s most vulnerable kids and families.

Now in its ninth year running, the successful Travis Schultz Winemakers Master Class backed by NAB for SunnyKids has raised more than $440,000 for the charity which has enabled SunnyKids to offer important services such as its early intervention program for families, critical to ensure kids have an opportunity to reach their full potential.

Event founder, Travis Schultz, says the event concept is based on providing an opportunity for

successful business people to connect, enjoy good wine and food, be entertained by special guests, with a side hustle of fundraising.

“We are delighted to showcase some of Australia’s best winemakers at this year’s event from the Barossa, Mornington Peninsula and Yarra Valley, in what promises to be an entertaining afternoon matching fine wine and food and plenty of opportunities for people to connect,” Mr Schultz said.

“This year’s event has been made possible by a group of generous sponsors, event partners, SunnyKids, a hard-working committee of volunteers, table hosts and guests. From the bottom of my heart – we are so grateful for the support from the Sunshine Coast business community.”

Now in its ninth year running, the total amount raised over the past eight years exceeds $440,000 for SunnyKids.

SunnyKids General Manager, Kathleen Hope, said SunnyKid’s vision is to have a Sunshine Coast community in which everyone feels safe, belongs and has the chance to reach their full potential.

“Events such as this enable us to support our community where they need it most. Last year alone, we delivered 19,500 hours of support for vulnerable families through our safe refuge, counselling services, SunnyKids in Schools, our ‘Mentoring Through Sport’ program and our Village Buddies program,” Ms Hope said.

“This special fundraising event truly blows me away each year. We have such a generous business community and when provided the opportunity to imbibe wine and fine food, connect with like-minded people and have a bit of fundraising fun on side, it’s amazing what can be achieved.”

For more information, go to www.sunnykids.org.au

Representing Polperro at the event will be Micheal Roelofs. After 18 years in the Noosa hospitality scene, Micheal curated the wine list at iconic Noosa institution Ricky’s River Bar & Restaurant where he met Sam Coverdale, the owner and winemaker of Polperro.

After having a few chats over the course of 18 months Sam invited Micheal down to Polperro to try the wine and become the Queensland Representative for Polperro and his sister label Even Keel wines.

Fast forward three years and the ride has been amazing. Micheal loves all aspects of farming the grapes, picking them and the magic that happens in the winery to seeing someone take their first sip and be blown away with the complex set of flavours that Sam Coverdale is renowned for.

Sarah Crowe is the Winemaker and General Manager of one of the oldest vineyards – Yarra Yering – in the Yarra Valley.

After studying and working in Horticulture, Sarah began her wine career with vineyard work in the Hunter Valley. Sarah completed international harvests in both Oregon; focusing on Pinot and Chardonnay, and the Rhone Valley; focusing on Shiraz and Viognier. After 12 years in the Hunter Valley, Sarah was looking for a new challenge and decided to head for cool climate viticulture.

Sarah made the move to the Yarra Valley joining the Yarra Yering team in September 2013 to focus on one single iconic vineyard site. The vineyard is central to wine quality and Sarah considers the Yarra Yering vineyard to be the best she has ever worked with. The release of her first wines, the 2014 vintage saw her named James Halliday’s Winemaker of the Year 2017.

Jane Ferrari is the wine ambassador for Brockenchack which is a single vineyard wine producer in the Barossa’s picturesque Eden Valley, specialising in Shiraz.

Jane became one of the first female students to be accepted into Urrbrae Agricultural High School. This led to her completing a winemaking degree at Roseworthy Agricultural College where she undertook her mandatory vintage experience with the legendary John Glaetzer at Wolf Blass Wines in 1983.

After graduating, Jane worked for Tollana Wines and United Distillers, until making the move back to the Barossa Valley in 1989.

Jane worked at Rockford Wines with Robert O’Callaghan and after three years apprenticed to Robert, Jane moved to the oldest family owned wine growing operation in Australia – Yalumba – for 25 years.

Since then, Jane has become known as a wine ‘storyteller’ and was awarded the title of ‘Australian Wine Communicator of the Year’ in 2012.

Since 2008, Andrew Quin has been the Head Winemaker of Hentley Farm, influencing the evolution of the vineyard with a focus on crafting modern wines from traditional Barossa varieties.

With his firm conviction that the best wines are made in the vineyard, it is no surprise that Andrew was drawn to Hentley Farm after returning home from vintages in France and the USA.

His original field of study was horticulture and for Andrew, winemaking provides the perfect opportunity to combine his scientific and technical knowledge with his artistic flair in the pursuit of ultimate quality.

Andrew’s approach to these wines is about thoughtful and minimal winemaking intervention – to craft wines of balance, power and elegance with the distinct Hentley Farm hallmarks of vibrancy, velvet silky tannins and intense flavour richness. His wines show varietal diversity and are attractive and approachable when young, with the depth and structure for extended cellaring.

This event would not be possible without the generous support from our sponsors and event partners: