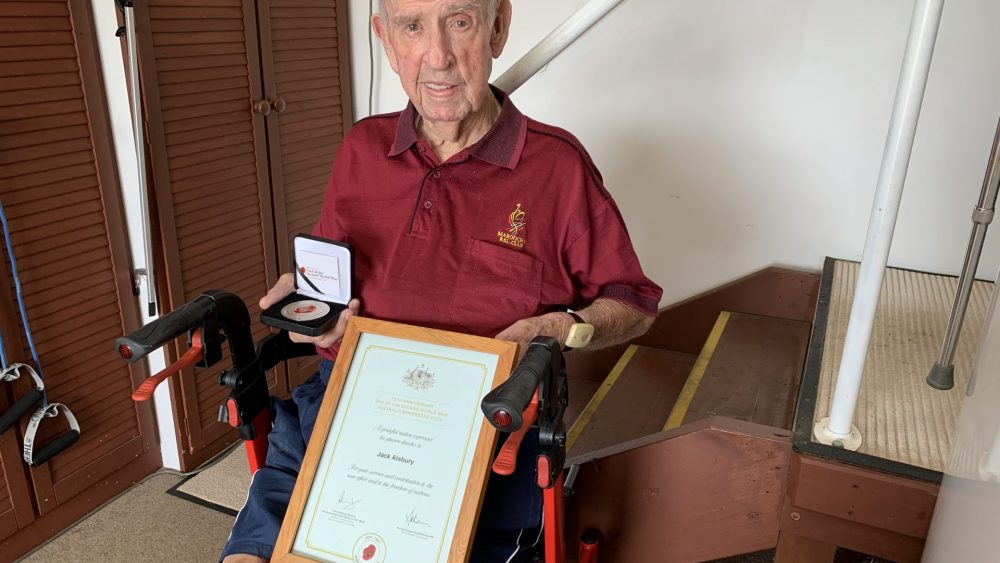 The Maroochy RSL family — including more than 40 World War II veterans — will pause this Remembrance Day at the Cotton Tree Cenotaph to acknowledge those who have bravely served for our country.

Maroochy RSL President and veteran himself, Michael Liddelow said as the 2020 Remembrance Day events were limited to invite-only due to the pandemic, this year’s events would be particularly special for the community to come together and remember those who have made the ultimate sacrifice.

“We don’t underestimate how important Remembrance Day is for our veterans — irrespective of their age, where they served or how long ago they returned home,” Mr Liddelow said.

“Services such as this along with the other support provided by Maroochy RSL, ensure our veterans feel appreciated for the sacrifices they made and for many, form an important part of a lifelong connection to the RSL.”

This is certainly the case for Australia’s longest serving RSL member and Buderim local, Jack Alsbury, a World War II veteran who will celebrate his 100th birthday in January next year.

“In 1944 I was nominated to be a member of the RSL by my father who was already a member after having served in the First World War — so this year I have been a member for 77 years,” Mr Alsbury said.

Mr Alsbury served in the Royal Australian Air Force (RAAF) from 1942, as a Leading Aircraftsman, in the New Guinea theatre of war.

He said while there are many things from the war he would like to forget, he will always remember proposing to his late wife, Dorothy, who also served in the RAAF, via a letter he wrote while in battle.

Mr Liddelow said the Maroochy RSL team is well aware of the important role they play in the lives of veterans such as Mr Alsbury and the many others that call the Sunshine Coast home.

“The Sunshine Coast is currently 6th on the list in Queensland as Local Government Areas (LGA) with the most veterans and the 4th highest in regards to the number of war widows[1],” Mr Liddelow said.

“Remembrance Day is an opportunity for veterans who have served over a number of conflicts to congregate with the friends and families who have supported them on their journey and to reflect. It provides a unique opportunity to stop, to remember and to say thank you.

“Due to COVID-19 restrictions last year we had to live stream the service, however this year we’re looking forward to welcoming everyone to the Cotton Tree Cenotaph to pay their respects and commemorate this national day of remembrance. We expect 60 distinguished guests and politicians to be in attendance as well as a large crowd from the public.

“On 11 November 1918, the guns of the Western Front fell silent after four years of warfare, bringing an end to the First World War and seeing this day come to represent all those who have served before and since.

“We welcome anybody to come down to the Cotton Tree Cenotaph to pay their respects and commemorate this national day of remembrance.” For more details please visit www.maroochyrsl.com.au/events/remembrance-day-2021