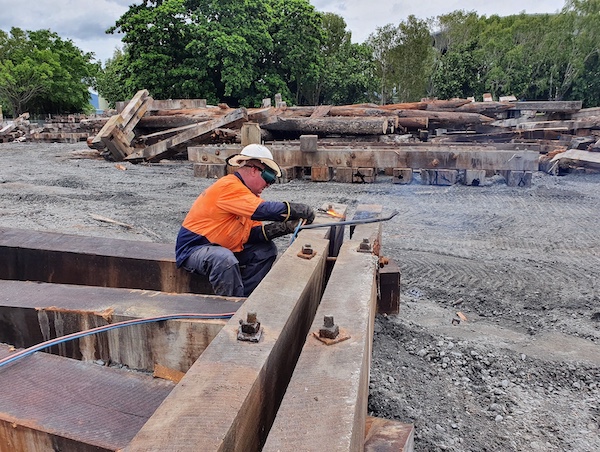 Historic rare timber from the world heritage-listed Wet Tropics of Queensland could find a new home with recycled timber specialists Kennedy’s Timber removing hundreds of metres of piles as part of the $20 million upgrade of the Cairns wharves 1-6.

The Cairns Wharf was built in 1942 during World War II and was covered in 200mm of thick concrete, which has ensured elements of the timber remained in remarkable condition for its age.

Kennedy’s Timber founder Michael Kennedy said it is an honour to be part of such a significant project and to be asked to find a home for this piece of history.

“In 26 years of timber recycling, I have never seen such outstanding timber with a rich history – both Crows Ash and Hickory are very rare timbers and highly sought-after,” Mr Kennedy said.

“Years ago, the timber was milled in the rainforest of the Wet Tropics of Queensland which is now a UNESCO World Heritage site and logging is no longer permitted.

“To be able to give this timber to a new home is such a unique opportunity and we’re certain there will be plenty of individuals excited about the prospect of using this timber on their projects.

“The timber is very desirable for furniture makers due to its golden colour, durability and rich patina. Recycled timber also stores carbon so it’s always a great environmentally-friendly option.”

The state government is spending $20million dollars to upgrade the Cairns wharves from 1-6 as part of the $127million Cairns Shipping Development Project – which is designed to attract large cruise ships and boost tourism.

A new concrete jetty has been built to replace the old structure at wharf 6 with 15 per cent retained for heritage purposes.

The timber removal process from the project site will take an estimated three weeks to complete.

“We want the Cairns Wharf recycled timber to go towards special projects and we have a few in mind – I would love to hear from local builders, architects and designers who have an exceptional home for this piece of history,” Mr Kennedy said.

Kennedy’s Timber is a specialist in recycled timber within the commercial and residential building industry and provide the full spectrum of timber design options.

Their recycled timber has been used in projects like Suncorp Stadium, Tree of Knowledge in Barcaldine, Parliament House Canberra, Hilton hotel and many resorts.

Jobs created as sod turned on boutique apartments in Coolum