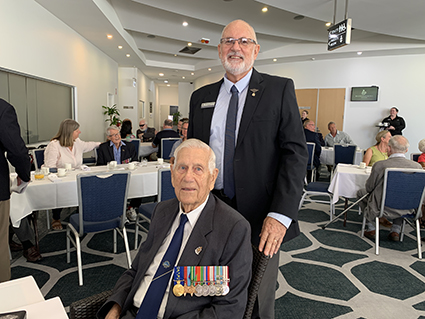 Today Maroochy RSL will welcome 20 World War II veterans to the club as part of its ongoing veterans’ events program, to both celebrate and thank them for their service over a cup of tea and cake.

More than 600,000 Australians served during World War II, and less than 3,000** are believed to remain — all in their mid to late nineties, leaving precious little time to hear their stories and learn of their resilience and experiences firsthand.

Maroochy RSL President Michael Liddelow said these morning teas not only provided an opportunity for veterans and their families to come together, but also acted as a solemn reminder for the community that previous generations have faced all manner of conflicts, pandemics and economic depressions.

“In this period of globally challenging and unprecedented times, now more than ever, people need hope,” Mr Liddelow said.

“For many veterans, the current COVID-19 pandemic pales in comparison to some of the atrocities they endured while serving Australia during World War II.

“This is not to say that peoples’ fears and uncertainty at the moment are not real or warranted, but rather provides important perspective on how to manage our fear and prioritise the things that matter most in times of crisis.

“These men and women are heroes. They displayed endless courage and sacrifice, whilst embracing hope. They can teach us the importance of exuding confidence despite facing adversity and appreciating the simple things that we often take for granted.

“They can teach us the value of the human spirit – to always believe in ourselves and our ability to be resilient and to heal; and to look after our mates and lean on one another when times are tough.”

One of the veterans attending on Friday is nonagenarian Allan Quartermaine OAM who just turned 97 this week and has been volunteering with Legacy for over 50 years. Mr Quartermaine joined the Royal Australian Navy in April 1943 where he served on HMAS Kiama in waters around New Guinea in 1944/1945.

“The most important thing is having a great support network of family and friends, which is critical to enjoying life. And, if you select your friends carefully, you’ll have mates for life.”

Mr Quartermaine was discharged in July 1946 and re-joined the Commonwealth Bank where he worked prior to joining the Navy. In 1957 he was promoted to accountant before escalating through various levels of management prior to retiring in 1986.

“I joined Legacy in 1964 so have now been involved 56 years, supporting and advocating for the partners and families of deceased or incapacitated veterans,” Mr Quartermaine said.

He received an OAM in 2007 for service to the community of the Sunshine Coast through ex-service organisations and the Buderim Bowls Club.

He is also a member of the Maroochy RSL, which has the mission to represent and show appreciation to the local veterans in the Sunshine Coast community.

“Events like these allow us the opportunity to dedicate a moment in time to those, whose acts of valor, self-sacrifice and loyalty have allowed us the freedom we have today,” Mr Liddelow said.

“The age of the veterans coming for tea starts from 94 and ends with our oldest veteran attending in Arthur Scholes who is 99 years of age.  There are always interesting stories shared at these events such as Coral Sea veteran Bill White who travelled across to New York for dinner on the USS Intrepid with Donald Trump and Malcolm Turnbull, the Australian PM at the time, for the Coral Sea commemoration a few years back.

“We also have Marjorie Strukelj attending who laid a wreath at last year’s Remembrance Day and Betty Powell who is a true Sunshine Coast local, born in Cooroy. You can imagine the change that Betty has seen on the Sunshine Coast over the past 90-plus years.”

The morning tea — which will be attended by 20 veterans and their 41 guests — will be held at the Maroochy RSL Events Centre from 10.30 until 11.30am.

Maroochy RSL donation drive to help the vulnerable this Christmas